How Argentine Park got its name?

Does anyone know how Argentine Park in sector G6 of Islamabad got its name, asked the Argentinian Ambassador rhetorically? He paused for dramatic effect and looked at the bevy of intellectuals, academics, think tankers, former diplomats, journalists and at least one businessman and senator, including some very old inhabitants of the capital city listening to him didn’t have a clue.

Mr. Rodolfo J. Martin-Saravia, the Ambassador of Argentine and the dean of the diplomatic corps in Islamabad was explaining to the assembled gathering the problem that his country was facing with the UK in resolving the problem over the Malvinas (Falkland Islands). He had spoken eloquently for nearly two hours about how the British had recognized the independence of Argentine including the disputed islands in the nineteenth century and then had forcibly occupied it in 1833. Britain was at that time a superpower and it armadas ruled the waves. Argentine could possibly do nothing against imperial Britain’s military might. In 1982, Argentine under Gen Galtieri had tried to unsuccessfully to reclaim the islands militarily; grossly underestimating Margret Thatcher’s potential to launch an expeditionary force to thwart the Argentinian efforts. They had also not reckoned with the American support to their NATO ally in form of refueling facilities en route and satellite imageries to plan and execute a very long distance operation. The British had since then held a plebiscite in the islands and have perpetuated their rule on the basis of the vote that they got. The result of the plebiscite was a foregone conclusion because all the 3000 odd islanders are of British origin. Comparing the situation with Kashmir, the Ambassador explained that both Pakistan and Argentine were faced with a similar dilemma. They were both faced with a militarily strong nation that was forcibly occupying a territory that was not theirs and not willing to negotiate at all to settle the central issues that was the central issue in the foreign policy of both countries. In case of Kashmir, the Indians were unwilling to allow the people to exercise their right of self-determination, while in case of Malvinas; a sham plebiscite was held against the principles of geographical nearness, historical context and existing UN resolutions. The British were guilty of holding on to 14 territories out of 19 registered as colonies in the twentieth century. Its greed was great. It had violated the agreement with Argentine to give off shore oil and gas exploration rights to companies by dealing with them directly, their nuclear submarines were patrolling the area regularly in the area that was a Nuclear Weapons Free Zone and had ulterior motives i.e. use the islands as a jump of point to carve out territory in the Antarctic. British global ambitions are reflected in their military expenditure that is 2.2 per cent of its GDP as compared with 0.7 per cent in case of Argentine.

His presentation over, the Ambassador was holding court over lunch. The mood was relaxed and the conversation leisurely but the Ambassador was still working like a true diplomat to build his country’s case from angles. Quite naturally he wanted to strike the sympathetic cord with the thinking minds of his host country. Argentina Park he explained was donated by the government of Pakistan led by President Zulfikar Ali Bhutto on the 25th May 1973. It is the only park in Pakistan that has the name of a foreign country. It was a token of recognition for the support of the Government of Argentine during the 1971 War in the United Nations Security Council and the General Assembly. Argentina had supported the resolution calling for an immediate cease-fire; the return of the troops that had invaded East Pakistan and the return of the prisoners of war and refugees. The resolution passed with the efforts of the Argentine Mission in the UN was instrumental in stopping a bloody war that could have had much more serious consequences.

Argentine’s support to Pakistan hasn’t stopped there. Since it became the head of the Nuclear Suppliers Group (NSG) in 2014 for a two year term it has insisted that India resolve its issues with the neighbouring countries before it becomes member of the exclusive club. In 2014, India pressed its case for membership in the Buenos Aires Plenary Meeting of the NSG, in the belief that it had enough international support behind it but the NSG remained unmoved. In fact the Buenos Aires meeting imposed a new condition on India, calling upon it to take a leading role in halting the spread of nuclear weapons, and more specifically, demonstrate serious efforts of working towards nuclear restraint measures and open negotiations with Pakistan and China to end the regional nuclear arms race in the region. The 2015 NSG Plenary held in Bariloche, Argentina, in June this year, did not change the position that had been taken in Buenos Aires last year.

Pakistan has reciprocated by supporting Argentine in the peaceful settlement of the Malvinas at the UN General Assembly. The Ambassador has recently been awarded Hilal-i-Pakistan by the government of Pakistan in recognition of his efforts to provide funds for a 1000 bed hospital in Polyclinic. The CDA despite his best efforts have yet not started work on it. Pakistan needs more friends like Rodolfo J. Martin-Saravia. 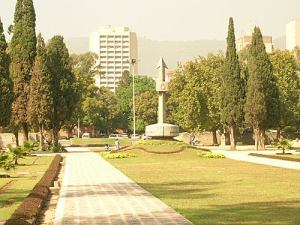