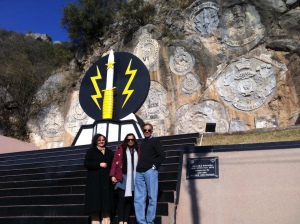 There are many places in the world that I would like to see before I die.

One of these places not very far from where I live and which I hadn’t seen thus far was Cherat. I had spent my childhood in Peshawar – from 1964 to 1974 to be precise. I must have passed Pabbi many times on the GT Road but somehow could never take the turn for Cherat. Later in life I heard many friends describe their training routine as special services officers in Cherat. I also read about it in the books authored by former SSG officers (Unlikely Beginnings by Major General A.O. Mitha and The Way it Was by Brigadier Z.A. Khan) and could conjure in my mind a remote and secluded hill station, where volunteers opting for the special forces were put through their uber-tough regime to become a commando.

My chance to visit Cherat came late in life, on a cold January day. An officer who was a second lieutenant when I had commanded my first battalion in Kashmir had just recently become the Commandant of the Special Operations School (SOS). Can I come visit him? I asked the young lieutenant colonel. “Sure come right away,” was the spontaneous and warm reply. So as not let the fleeting moment escape, we quickly packed an overnight bag and left in the fading afternoon light towards Cherat. As per instructions I drove on the Motorway uptil Peshawar and then retraced my journey back to Pabbi (about 20 kms from Peshawar) and turned right through the Bab-e-Khattak. Cherat I had been told was 37 kms from this symbolic entryway into Khattak territory. We drove past the Jallozai camp that had gained fame and notoriety as one of the largest refugee camps for the Afghans fleeing the Soviets. It still houses Internally Displaced People (IDPs) from the tribal areas. It was dark by the time we reached the APS Check Post and it was darker and steeper still as we waited at Chapri Check Post for the traffic coming downhill. It is one way and the traffic uphill and downhill opens every 15-30 minutes. It was pitch dark by the time we entered the cantonment and couldn’t do much but enjoy a wonderful dinner with our host.
Cherat was first used as a place for a sanatorium for the British troops escaping the hot malarial plains of Peshawar in 1861. It was turned into a military garrison in 1886. The British constructed churches and bungalows and buried their dead in the quaint graveyard overlooking the valleys below. At least one of the churches and most of the bungalows are still being put to good use. Cherat provides a commanding view of the Peshawar and Khwarra Valleys. Towards the west mountain ranges are demarcating the Frontier Region Kohat and in the east on a clear day, one can see the bend of the mighty Indus. From 1949 to 1955 the boys wing of the Armored Corps Center was located here, One of its famous officers was Captain Zia ul Haq. In 1955 Cherat became home to Pakistan’s nascent Special Forces. Ever since its claim to fame has been its significance as the training area for the SSG.
The morning view was glorious as the sun rose from the east and shed its light on the hamlets located in the verdant valleys below. There is a profusion of wild olives at several places and wild boar and jackals find a ready habitat to procreate and roam free. After the weather had become bearable (Cherat is located at 4500 feet and can be pretty cold) our host arrived to take us for a visit of the small cantonment. The SSG has converted most of the available area into their training ground. On the bare rocks one can still see the crests of the British regiments that lived here. The SSG has put up a huge monument at a prominent place to commemorate its fallen comrades. The survival range is an interesting place and the visitor marvels at the clever improvisations done by the Special Forces to strike terror into the hearts of the enemy. The SSG not only prepares troops from all branches of the military but it also train soldiers from friendly countries. The Cherat training is held in high esteem internationally. A barrack has been converted into a museum, where personal possessions of heroes, relics from special operations and war trophies have been displayed. An NCO gave us a guided tour and familiarized us with the history of the Special Forces. It was a great feeling to have been to this great place and it was with a happy feeling that we descended from Cherat, the next afternoon, to make our way back to the hum drum of our daily lives in Islamabad.

Will you work for Gaddafi?

“Will you work for Gaddafi?”

The question was popped at me point blank by a young North African man. Not used to this kind of questioning I was taken  aback for a moment. The year was 1986. My wife and I had taken a ferry ride across the Mediterranean for a holiday in Europe. I a 29 year old Army captain was deployed overseas with a Pakistani armored brigade in the Kingdom of Saudi Arabia and was visiting my family in Algiers, where my father was serving as Pakistan’s Ambassador.

When this question was thrown at me, we had landed in Marseilles, the port city of France – home to hundred and thousands of North African Muslims from across the Mediterranean Ocean. We were hungry and just wanted something to eat. In those days before Halal became a standard description for Muslim food, just avoiding pork was enough to preserve one’s Muslim identity. I had just located a food cart, whose owner seemed Muslim and therefore a safe bet. My knowledge of French wasn’t enough to make intelligent conversation. Only way I could make sure my food preference were accurately conveyed was by using an assortment of widely off the mark mimicry. I had never been a good actor any way. I just wanted a burger that was kosher (the word was politically correct for that time). The cart vendor took me aside and asked in a hushed stage whisper, if I was willing to get recruited for the Libyan potentate, known for his penchant for harboring terrorists. I wasn’t quite prepared for this uncalled for job offer. I was honorably employed and I was certainly not interested in any mission that Mr Gaddafi had in mind for wandering Muslim tourists. I would learn later that the Lockerbie bombing was the handiwork of one of his henchmen. No thanks I just wanted a Muslim sandwich, if he could please make me one. I would pay him in Francs (the currency of France before Euro) and I would go my way.

After the attack on Charlie Hebdo newspaper, the Parisian newspaper that publishes sacrilegious cartoons, I was reminded of the indecent proposal made in a seedy French alley in the Arab quarters of Marseilles, nearly thirty years ago.

France was and is a very polarized society. The North African Muslims, despite being second or third generation immigrants have not been accepted as French nationals in the strictest sense of the word. Economically they stagnate at the very bottom. Low wages and lesser expectations from life has turned the North African youth into angry young people, unhappy and dissatisfied with their existing environment. They are perhaps not even practicing Muslims but violence in the name of religion is their way of seeking revenge, I think it is time that French initiated long term solutions to prevent such incidents. Anti immigration laws is certainly not the best option. Integration and assimilation are notions that can prepare the French society to face the future in a balanced and confident manner.   Otherwise times will change, names will change but methods to bring about violent change will remain the same.

National Reaction to the 16 December Tragedy

The 16 December 2014 terrorist attack on Army Public School (APS) Peshawar in which 140 students and teachers were brutally killed by terrorists evoked a wide range of emotions and responses. In many cases the reaction matched the violence of the attacks. The emotions were spasmodic and immediate. Charged and angry, the civil society called for immediate actions like removing prayer leaders preaching hatred in government mosques, hanging terrorists already on the death row, and establishing military courts to prosecute and execute terror convicts on the fast track. This baying for the blood of those involved in heinous terror crimes was stunning and totally eclipsed the essentially mild and benign ethos of our people. In many ways one could understand the violent sentiment that overshadowed a wiser and calibrated response to the tragedy.

The time  was ripe for such an incident. It had been on the slow fuse for many years now. Many blame the policies of former rulers that turned our easygoing and laid back society into one that bred intolerance, disharmony and discord. The monsters that we confront today and find hard to rein in have actually been very much our own creation. Whatever may be the genesis of this problem, the sad fact is that our homegrown Frankenstein has come to haunt us. True the phenomenon of terrorism is now being aided and abetted by countries and agencies hostile to our country but then this happens, when you are weak and infirm. The vultures are drawn in by the smell of impending death to feed on decaying organs.

In my opinion the response to this heartrending incident could have been more measured and calculated. What is required besides immediate measures to root out terrorism in all its forms and manifestations is to embark on a long term strategy to change violent mindsets. Whereas, the National Action Plan (NAP) is the essential surgery to remove the cancerous parts, a strategic plan is needed to cleanse the body and create enough antibodies to prevent another relapse into this regressive disease. The entire nation has to be disabused of notions of false superiority and exclusiveness that feeds passions to kill those not belonging to the mainstream. In large parts such a nostrum can only be developed by creating an education system that teaches human values and that reflects religion and for that matter all religions as promoters of peace and harmony. There is a need to change the mindsets and develop a system that is merit-based and creates equal opportunities for all Pakistanis irrespective of caste, creed and gender. The fault lines that have appeared between the ‘haves’ and ‘have-nots’ must be bridged to create a united nation – A nation that recognizes talents and provides jobs to all segments of the society. A country in which the rule of law exists and where all people are treated as equals.  Unless we see beyond our immediate grief and keep looking for revenge based solutions, we will remain lost in the wilderness of apathy and our real objective i.e. the welfare of the common man will remain elusive.